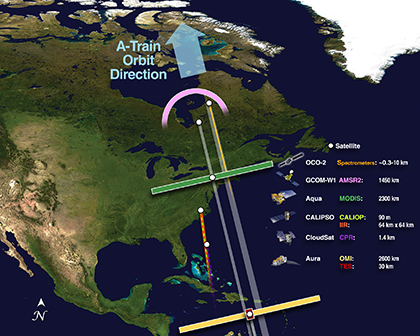 This image shows the Afternoon Constellation as if looking down on all the satellites from orbit. The satellites that make up the constellation travel from south to north (bottom to top in this image). The colorful bars across each satellite illustrate the swath of some key instruments. From this perspective, the instruments with smaller footprints are barely visible. The table in this illustration lists each satellite, selected instruments, and the width of the selected instrument swath in kilometers. 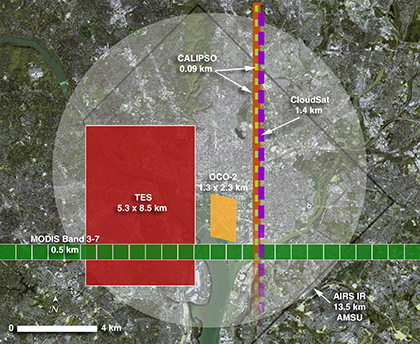 This image shows the overlapping footprints of several of A-Train and C-Train instruments (colors correspond to those in the above image) superimposed on a close-up image of Washington, DC. The purpose is to give a sense of how, over the course of an orbit, the swath of each instrument overlaps the others, allowing for the nearly simultaneous observations of the same location or event that are crucial to the science of the Afternoon Constellation. This close-up perspective also brings the challenge of constellation flying into sharper focus. In order to successfully overlap science measurements from different A-Train and C-Train instruments, each with varying footprints and resolutions, each member of the Afternoon Constellation must strictly maintain its position in the constellation.

NOTE: While the orbits of the A-Train and C-Train follow slightly different ground tracks due to differences in altitude, the two constellation tracks intersect each other about every 20 days. This allows simultaneous A-Train/C-Train instrument measurements on a regular basis.