The Benefits of Constellation Flying - A-Train

The Benefits of Constellation Flying 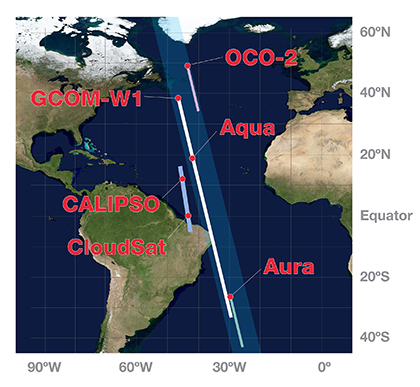 The Afternoon Constellation is a series of satellites following each other in orbit. In order for multiple instruments to effectively observe the same Earth scene—and thereby obtain more data than could be provided by any one instrument—the instruments must view the scene within a short time period to prevent changes in observing conditions (especially true for clouds). Different satellites that carry these instruments must, therefore, fly closely together in a carefully planned and executed manner.

Science from the MODIS instrument on Aqua can be compromised by sun glint for non-cloudy scenes over the ocean. Therefore, when CALIPSO and CloudSat were still positioned within the A-Train proper, they were located so that coincident MODIS views avoided this potential sun glint signal contaminating. Specifically, these two satellites were positioned to the side of Aqua’s ground track that is opposite the sun. Aura is positioned substantially behind the other A-Train satellites, so its Microwave Limb Sounder (MLS) can view horizontally under the same portion of the atmosphere that Aqua is viewing from above.

There is a remarkable advantage to this precise constellation: At the expense of a slight temporal separation, constellation flying of multiple satellites replicates observations from a single satellite that is hundreds of kilometers in size.