A Tour of the A-Train

The Orbiting Carbon Observatory 2 (OCO-2) spacecraft is the first component in the A-Train (with the earliest equator crossing time). Launched on July 2, 2014, OCO-2 obtains global, space-based observations of carbon dioxide (CO2)—an important greenhouse gas in the Earth’s atmosphere. Three high-resolution grating spectrometers measure CO2 concentrations, their distribution over the entire Earth, and their variation on regional- and seasonal-scales. Combining data from OCO-2 with meteorological observations and ground-based CO2 measurements will aid in characterizing CO2 sources and sinks on regional scales at monthly intervals for two years. The successful use of OCO-2’s spectrometers can be applied in future CO2 monitoring missions. OCO-2 is a mission critical to improving predictions of future CO2 increases in the atmosphere, understanding the processes that regulate them, and determining how increases impact climate. 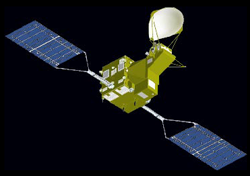 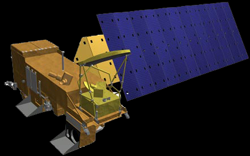 Launched on May 4, 2002, the Aqua (Latin for “water”) mission focuses on studies of water in the Earth/atmosphere system. Aqua carries an instrument payload that measures water in its gaseous, liquid, and solid forms, plus atmospheric and surface temperatures, land and ocean vegetation, and many other aspects of the global climate system. The Atmospheric Infrared Sounder (AIRS) is a high spectral resolution infrared sounder designed primarily to obtain temperature and humidity profiles from the surface to an altitude of about 40 km. The Advanced Microwave Sounding Unit (AMSU) aids in retrieving atmospheric temperature profiles, especially under cloudy conditions and in the upper atmosphere. The Humidity Sounder for Brazil (HSB), which is no longer functioning, was used to obtain humidity soundings through the atmosphere, for determining cloud liquid water, precipitation, and integrated precipitable water. The microwave measurements of the AMSU and HSB are particularly important for enhancing the AIRS measurements in the presence of clouds. Taken together, the three sounders (AIRS/AMSU/HSB) make up the most advanced sounding system ever to fly in space. The Advanced Microwave Scanning Radiometer-EOS (AMSR-E), which is no longer functioning, measured precipitation, water vapor, sea surface temperature, wind speed, sea ice, snow cover, and soil moisture. The Clouds and the Earth’s Radiant Energy System (CERES) is a radiometer that measures major elements of the Earth’s radiation balance. The Moderate Resolution Imaging Spectroradiometer (MODIS) obtains information about a wide variety of biological and physical processes of relevance to Earth system science, including cloud and aerosol properties.

*AMSR-E and HSB are no longer functioning. 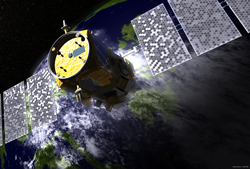 The Cloud-Aerosol Lidar and Infrared Pathfinder Satellite Observation (CALIPSO) mission, launched on April 28, 2006, is a joint U.S./French collaboration that provides unique measurements to improve our understanding of the role of aerosols and clouds in Earth’s climate system. The combined observations from CALIPSO and the other satellites of the Afternoon Constellation improve our ability to predict long-term climate change and seasonal to interannual climate variability. CALIPSO’s main instrument is the Cloud Aerosol Lidar with Orthogonal Polarization (CALIOP). CALIOP is a two-wavelength polarization-sensitive lidar that measures the vertical profiles of aerosols and clouds with 30-m vertical resolution and 333-m horizontal resolution. The lidar profiles provide information on the vertical distributions of aerosols and clouds, cloud ice/water phase, and a qualitative classification of aerosol size. CALIPSO also carries a three-channel Imaging Infrared Radiometer (IIR) and a single-channel high spatial resolution Wide-Field Camera (WFC) designed to complement the lidar and obtain information on cirrus cloud particle size and radiative characteristics. The WFC also allows highly accurate spatial registration, when required, between CALIOP and instruments on the other Afternoon Constellation satellites.

CALIPSO exited the A-Train to join CloudSat in the C-Train on September 13, 2018. (See CloudSat below for more information.) 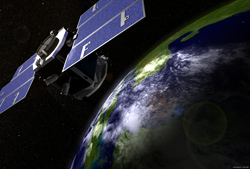 Not far behind CALIPSO is CloudSat. CloudSat launched on April 28, 2006, with CALIPSO. CloudSat is a joint U.S./Canadian mission intended to provide a global survey of cloud properties. CloudSat studies clouds in detail to better characterize the role they play in regulating the Earth’s climate. Data returned is used to improve cloud parameterizations in atmospheric models, which increases the accuracy of weather forecasts and climate predictions made using these models. CloudSat carries a powerful Cloud Profiling Radar (CPR) with 500-m vertical resolution. Rather than a scanning device like many of the instruments flying on other satellites, the CPR sends out an active pulse and receives a return signal. Since the CPR transmits in the upper microwave region (94 GHz) where the signal is not significantly attenuated by clouds, it is able to accurately detect most ice clouds and water clouds. A number of data products related to various cloud properties have been derived from the data collected by CloudSat, and the mission continues to provide valuable information on the dynamics of clouds in storm systems and climate processes.

On February 22, 2018, CloudSat exited the A-Train following the loss of one of its reaction wheels. CloudSat resumed taking data in Daytime-Only Operations (DO-Op) mode from a “C-Train” orbit located 16.5 km (~10 mi) below the A-Train on May 7, 2018. Following science recommendation, the decision was made for CALIPSO to join CloudSat in the “C-Train” orbit to resume the joint CALIPSO/CloudSat measurement record. CALIPSO exited the A-Train on September 13, 2018. Since CALIPSO experiences about twice as much drag as CloudSat, CloudSat will conduct periodic orbit lower maneuvers to maintain a 100s along-track offset with respect to CALIPSO. This positioning will be maintained within about +/- 8.5 seconds, or about 4km of ground track offset, from CALIPSO.

While the orbits of the A-Train and C-Train follow slightly different ground tracks due to differences in altitude, the two constellation tracks intersect each other about every 20 days. This allows simultaneous A-Train/C-Train instrument measurements on a regular basis. 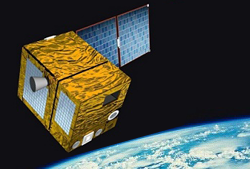 The Polarization & Anisotropy of Reflectances for Atmospheric Sciences coupled with Observations from a Lidar (PARASOL) spacecraft flew behind CloudSat in the A-Train. On November 16, 2011, PARASOL was lowered to 9.5 km under the A-Train and on December 18, 2013, PARASOL ceased operation, fully exiting the A-Train. PARASOL made measurements of the total and polarized light in several wavelengths and at several different viewing angles. PARASOL’s Polarization and Directionality of the Earth’s Reflectances (POLDER) instrument cycled through eight narrow wavelength bands and, for certain wavelengths, sampled three distinct polarizations. All of these data are combined to provide a thorough assessment of the state of the light reflected by the coupled surface-atmosphere system. Information on polarization in several directions is useful for characterizing clouds (both liquid and ice) and aerosols in the atmosphere. This measurement technique helps scientists determine exactly how much of the aerosol present in Earth’s atmosphere comes as a by-product of human activities and how much is naturally occurring—an important question in climate change studies.

Finally, the “caboose”—the final current component in the constellation—is Aura. The Aura (Latin for “breeze”) mission launched on July 15, 2004. Aura’s suite of instruments studies issues related to air quality, stratospheric ozone, and climate change. For example, Aura allows scientists to trace air pollution events back to local and regional sources, making the intercontinental tracking of pollution transport possible. The High Resolution Dynamics Limb Sounder (HIRDLS), which is no longer functioning, observed global distributions of temperature and several other trace species in the stratosphere and upper troposphere by observing the Earth’s limb-meaning the instrument scanned the horizon as opposed to looking down on the surface. The Microwave Limb Sounder (MLS) observes the limb to measure concentrations of ozone-destroying chemicals throughout the stratosphere and upper troposphere, as well as water vapor—a greenhouse gas—in the upper troposphere. The Tropospheric Emission Spectrometer (TES), which is no longer functioning, measured key air pollution constituents. The Ozone Monitoring Instrument (OMI) looks down through the atmosphere to measure ozone, aerosols, and other pollutants. Together, data from the instruments on Aura provide a rich source of information on the horizontal and vertical distribution of key atmospheric pollutants and greenhouse gases and how these distributions evolve and change over time. Combining Aura data with data from the other A-Train missions has helped reveal even more information on Earth’s climate processes.

*HIRDLS and TES are no longer functioning.