What is the A-Train? 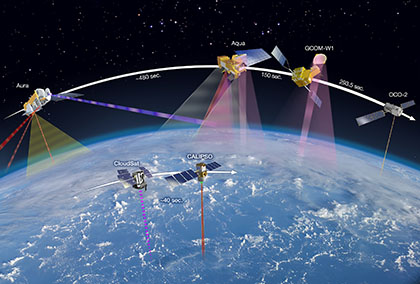 From their vantage point high above the Earth’s surface, NASA’s Earth-observing satellite missions are uniquely positioned to obtain comprehensive global observations of our home planet. NASA’s Earth Science Division freely and openly shares these Earth Science data with various federal, state, local, and international partners, who use the data for scientific research as well as a variety of practical societal applications that policy makers can use to help craft environmental policy.

NASA satellite constellations are groups of satellites that fly in close proximity to each other in a carefully planned coordination that allows for measurement synergy between the missions—synergy means that more information about the Earth environment is obtained from the combined observations than would be possible from the sum of the observations taken independently.

The Afternoon Constellation is one such satellite constellation whose members all have equator crossings in a northerly direction in the early afternoon at about 1:30 PM local solar time (as well as a southerly nighttime equatorial crossing at about 1:30 AM). At the present time, the international Afternoon Constellation now includes the A-Train satellites (OCO-2, GCOM-W1, Aqua, and Aura) as well as the C-Train satellites (CALIPSO and CloudSat). PARASOL fully exited the A-Train and ceased operation on December 18, 2013. See Table 1 for a complete list of current and past missions.

The Afternoon Constellation and Scientific Discovery

Five NASA missions are presently part of the Afternoon Constellation. This includes Aqua (launched in 2002), Aura (launched in 2004), the second Orbiting Carbon Observatory (OCO-2, launched in July 2014), and the Cloud-Aerosol Lidar and Infrared Pathfinder Satellite Observations (CALIPSO) and CloudSat (both launched together in 2006). In addition, there is a Japanese mission (launched in 2012) named the Global Change Observation Mission-Water (GCOM-W1). The French mission named the Polarization and Anisotropy of Reflectances for Atmospheric Science coupled with Observations from a Lidar (PARASOL) was lowered to 9.5 km under the A-Train on November 16, 2011, and ceased operation, fully exiting the A-Train on December 18, 2013.

Each one of these missions has its own objectives and makes its own unique contribution to improving our understanding of aspects of the Earth’s environment and climate. The real advantage of constellation flying, however, is that the data from the various satellites are synergistic and can be combined together to allow for even more comprehensive studies.

> Take a tour of the A-Train

1 This is in contrast to the Morning Constellation, whose members all have equator crossings in the late morning around 10:30 a.m. (and late evening, at about 10:30 p.m.)  The morning constellation presently consists of Terra, Landsat-7, SAC-C and the New Millennium Program’s Earth Observing-1 (EO-1).

2 The term “A-Train” comes from an old jazz tune, Take the A-Train, composed by Billy Strayhorn and made popular by Duke Ellington’s band, and has become a popular nickname for the Afternoon Constellation, particularly since EOS Aqua and Aura are both part of the formation.